There are currently 0 players online.

There are no wall posts here yet.

Hello everyone, hope you're all doing well! I've got some news for you which all revolves around the new seasonal crate: The Carnival Crate!

This crate is actually different in a few ways from previous seasonal crates, which I'll be sure to cover here:

Cosmetics are custom 3D modeled items that will mostly act as hats. Currently there is one for staff members and two carnival themed cosmetics that can be unlocked through the Carnival Crate. If you want to see these cosmetics, you will need to accept the server resource pack. If you decline and change your mind, edit the server in your server list and enable server resource packs. Otherwise, these cosmetics will just look like feathers! More will be added in the future and may not be just for crates, so stay tuned!

I've debated having an actual server resource pack on the server and have decided that it's time to see what we can do with one. There was a resource pack made by Dino and jdsmagic, but this pack does not contain anything from that pack. You are still more than welcome to download and use that pack, but the goal of this one is to offer more features to the server and be something that can be used without Optifine, which the other pack relied heavily on. Right now you have the option to decline the pack, but I encourage you to enable it and see what it currently offers. More will be added to it in the future!

I really enjoyed working on the 3D models for this crate and I hope you do enjoy them! I recently started working and will soon be diving back into school, so progress on future updates may be even slower than what it's been lately. However, I still intend on making updates for the server and I hope you'll enjoy what they will have to offer!

Until then, I'll see you all later,

Hello everyone, I got a new addition to the server as well as a few changes!

First off, thank you to everyone who took the time to give their feedback on the survey. The winner of the $10 store credit is jdsmagic! You can click here to see how the winner was picked. If the winner does not accept the credit a day after sending them a message on Discord, the winner will be rerolled.

Since a few of you have been suggesting this, I finally got around to adding one to spawn! You can do /warp pvp to get there, or go to the left side of spawn where some houses are located. Hopefully this is what you were all looking for in the PvP department! I will likely be disabling PvP in the end, nether, and resource world in the future.

I've heard that some daily quest artifacts are a little too challenging to complete all of the tasks, and I completely agree. To compensate, you will get a Lazurite key upon completing each task, meaning you can now get up to 4 instead of 3! Hope this makes doing artifacts more worth while.

I am currently in the process of coming up with the next crate and what it will include. I plan on making some of the items more interesting so be sure to keep up with our Discord for if and when I post sneak peeks!

One other thing that should be mentioned is that /voting is being removed due to errors and its inactive developer. A new plugin will go in its place where night will skip if a majority of players are sleeping in a bed.

Other than that, thank you for reading and have a good day,

Hello everyone, hope all of you are doing well and keeping your sanity! I think I've been loosing mine...

Before getting into the news, I regret to inform you all that Dino is no longer an owner of Lazurite, in case you were not already aware. It's unfortunate to see him leave the project behind, but we should all respect his decision and keep moving forward with the server.

With that out of the way, lets get into the news!

The vote crate has been redone to add some more exclusive items to it, including an Auto-Jump book, Beheading book, Voter's Boots, and Voter's Blade. There are also other smaller changes such as coin bags replacing the regular balance rewards and chance tweaking.

For a while now, people have been suggesting to increase the cost of in-game ranks, add more to them, or add more of the actual ranks. Right now, the new perks of the in-game ranks have been added, but the seven new ranks and new costs have not been implemented yet. If you want to skip the new ranks and get them at a reduced cost, you should do so before the 4th of May. Here are what the changes look like:

If you are a part of our Discord, then you're probably already aware of what is coming up on the server. The next addition to the server will be a custom dungeon! This dungeon will include several custom mobs and a boss with their own custom drops. Since there isn't much developed yet and could very likely change, I won't be sharing any screenshots just yet. However, if you stay caught up with the server, please join the Discord to stay up-to-date on announcements, changes, and more!

Hope all of you are excited for the rank rework and the dungeon that will come out at some point. I'll see you all later!

~ Tonus
Edit: I forgot to mention this, but player warps were removed due to the plugin no longer working. The "create iWarps" under the new Merchant perks is what will be replacing player warps.

Hello everyone, got some more news for all of you! Since Easter is approaching, we figured we should start up a sale and start preparing a new seasonal crate! After all, it's no longer winter...

For this sale, all of the regular ranks will be 20% off, keys will be 30% off, and everything else, aside from the monthly rank, will be 40% off! This sale will start tomorrow (3/30/20) and end after Sunday, April 12th.. or at least it should automatically do this. Since the Easter crate is not ready yet, this is the last sale the Winter crate will have, so be sure to act on it! Speaking of the Easter crate...

I'm happy to inform all of you that most of the crate is complete! However, we are still working on a few of the items. We intend on having it ready while the sale is running so all of you will have a chance of getting some keys for it at a discount. In the meantime, here is a preview of the crate's contents: 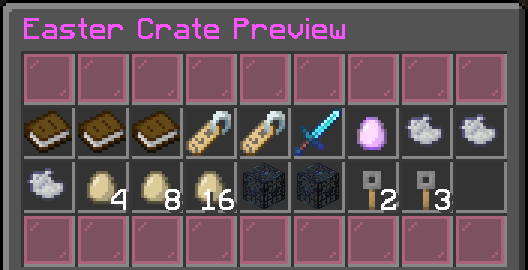 Thanks for reading, hope all of you are doing good during this period of time we are all in, and hope to see all of you later!

Hello, everyone! I've come back from the dead and I am here to give you some exciting news!

Tonight, the server went through a brief server maintenance to be updated to 1.15.2. This does not mean, however, that the main overworld, nether, or end have been reset. This means that you will no longer be able to join with clients that are below 1.15.2. This was done because support was dropped for 1.14.4, server performance should be slightly better, and all of you will be able to access the new mobs, blocks, and other new mechanics. How will you get the new mobs and blocks you ask? The world that was reset was the resource world.

To allow all of you to access what 1.15 has to bring, we have reset the resource world so you can gather all the new resources and bring them to the main world. This allows us to keep the main world all of you have put your time into and make this update beneficial to you, the players.

As many of you know, Dino has had to put his time towards school and I have had to for the most part, the rest of my spare time has not been spent on the server. I feel bad for neglecting the server for so long and that is why I'm kicking things off with the update to 1.15. I have no intentions to close the server as of right now and I do want to continue work on the server, but maybe not at a pace that will burn me out. I do have plenty of ideas for the server, but if any of you have some, please feel free to share here on the forums or on our Discord!

Thank you all for sticking around on the server and I'll see you all later!